How To Start Groundnut farming In Nigeria

How to start online Comedy Video/Scripts in Nigeria

All over the world, Nigeria is one of the countries with humorous persons. Recently, Nigeria was rank to be...
Read more

How to make money online in Nigeria Legitimately

There are many ways to make money online legitimately in Nigeria, the world is going digital almost every business...
Read more

How to join FES One International and Earn every day

FES One International: The new way of doing business has surfaced, the world is going digital so also businesses....
Read more

Eno Johnson
Eno Johnson is my name, I am an entrepreneur in the making. This blog was birthed because I needed a platform to pen my experience down in Agriculture and business.

Groundnut also called peanut is a legume crop which is grown mainly for their edible seeds. It is a proteinous crop that is very healthy for consumption and has several health benefits for both adults and especially children. The high rate of its consumption these days is an opportunity for proactive and smart agropreneurs and investors to take advantage and embrace groundnut farming.

If you are to plot a graph of the highest nuts consumed in Nigeria and the world over you would find out that groundnut tops the chart. I like fresh boiled groundnut so much and it seems to be in season.

It is a rainforest and savannah crop and Nigeria is one of the major producers of groundnut in West Africa other countries are; Ghana, Liberia, Niger, Mali etc. Groundnut can be grown twice a year during the early rains (March-April), late planting (August-September). The seeds can be used for feeding livestock (groundnut cake), vegetable oil (the best so far), for preparing soup, eaten raw as snack. 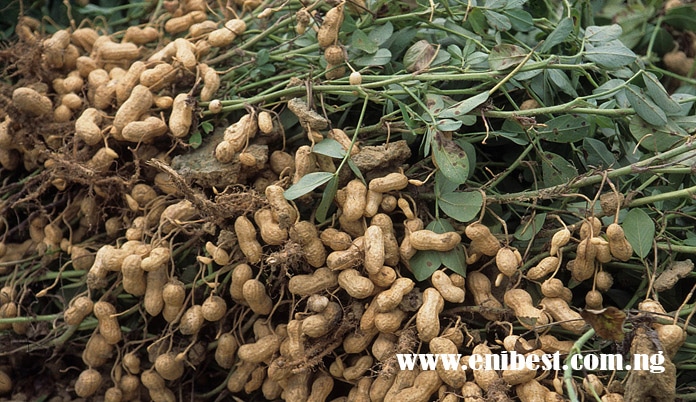 In this post, I will be stating the techniques to use for a successful groundnut farming business in Nigeria. This will be in the area of soil preparation, planting, weed control, diseases and pest control, harvesting, marketing etc.

Clear the land of grasses, remove stumps and debris, plough the ground before planting. Treat the land with insecticides to kill pest that may attack the seeds before and after germination. Dress the soil with manure preferable animal dung or compost. A ph of 5.0-7.0 is ideal for groundnut cultivation. It should be a sandy-loam soil, rich in organic matter. Groundnut can be planted on a plain ground, on ridges or beds.

In groundnut farming you can use shell or un-shelled nuts to plant, some people are of the opinion that the un-shelled nut is proper for use because it will be difficult for pests to destroy them easily but you nothing to fear if you have already treated your soil.

Just in case you didn’t do that and you want to plant with the un-shelled ones, then you will have to soak them in cold water 18-24 hours and drain or dry them for 3-4 hours before planting so as to prepare them against pest and diseases attack.

Or you treat the seeds with fungicides such as fernasan D before planting The temperature should be between 18-32`C for high performance. Groundnut should be planted 3cm-5cm deep into the soil, 2 or 3 seeds per hole. The larger the size the deeper the hole should be. Give Im by Im for the erect ones and 25cm-1m for the spreading type.

Early weeding is encouraged because groundnut can compete seriously with weeds. First weeding can be carried out after 1 month. Subsequent ones can be done by using discretion but you have to weed times before harvest.

Groundnut plant does not really bother so much about fertilizers because it fixes nitrogen which they use. But it would be wise to apply manure at every point of their development such as flowering and seed formation for a bumper harvest. If you are using inorganic manure apply the ones rich in Phosphorus. pentoxide can be applied during flowering.

READ ALSO: How To Start Beans Farming In Nigeria

The most needed nutrient is Boron, calcium is required during pudding, shortage of it will result in empty pods. 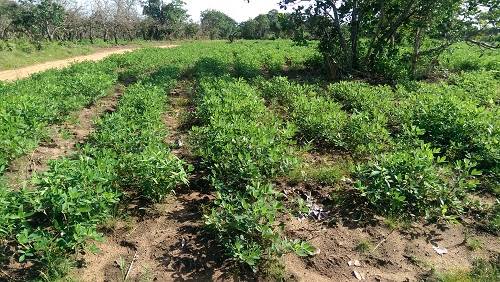 Groundnut farming is very interesting when you can handle pest and diseases.

Groundnut farming requires adequate amount of water. Spread throughout the whole of its growing season 4-5 months although they are drought tolerant. Irrigate the crops well, especially during flowering to avoid stress which can bring about reduce production and seed quality.

Groundnut matures within 4-5 months depending on the variety. Harvest can be done manually by the use of hand if the farm is small. Pull the plant if the ground is soft or use hoe to lift them out then use your hand to pluck the nuts out from their parent plant. But care must be taken in other not to damage the seeds with the hoe.

For a large farm up to a hectare use machine such as tractor-mounted groundnut shakers.
Shelling should be done by the use of hand, damaged or dirty nuts should be thrown away. Nuts that are to be used in the next planting season should not be shelled.

The yield varies according to; variety, environmental factors and husbandry. It can yield 6-10 tonnes per hectare. Dry the groundnut with their shell after harvest to a 6-10% moisture content.

When groundnut are not well dried, it would result in mould formation which can attract fungi. Thereby making the harvested crop non-consumable. Fumigate them and store in bags or silos etc. You can sell them outright to oil mill industries or marketers.

Groundnut can be inter crop with other crops such as maize. The crop to be used should be in the same hole with the nut. But it should be crops that are erected in nature. A space of 100cm by 100cm should be used when intercropping. Regular spacing reduces competition amongst crops and also allow maximum circulation of carbohydrate.

WHY YOU SHOULD GO INTO GROUNDNUT FARMING

When I knew that groundnut is a fast-moving foodstuff that is highly consumed was when I did the business for just a short while. I actually added it to a business I was doing at the time. A friend of mine helped me to purchase it in Adamawa State I made good money out of it. If buying and retailing gives you much money how will it be when you plant and sell by yourself.

The profit is from 50% upward, you will make more profit when you unshell them for sale and greater profit if you mill to oil. Groundnut farming can give many people jobs, especially in the oil mill sector.

Market men and women are already waiting to buy from the available ones around them. If you check very well you will find out that most of the groundnut sold in the southern market comes from the north why can’t you increase the production so that we can have what to export to other countries.

PEANUT FARMING CAN ALSO BE DONE IN SACK BAGS

Mix soil and manure equally into sack bags and drop 2 seeds into a hole of 4-5cm. Tend it the way you would do on a plain ground. It would perform far better than plain ground. Make you perforate the sack.

Please follow us on Facebook, and Twitter. Use the comment box for your questions and get a prompt response and don’t forget to subscribe to our newsletter below, just enter your name and email address.
Lastly, if you enjoyed this post, why not share with it your friends by making use of the share buttons below the newsletter form! In case you want us to write on any other topic, please let us know in the comments section or contact us.
We appreciate your support Thank you

How to start online Comedy Video/Scripts in Nigeria

All over the world, Nigeria is one of the countries with humorous persons. Recently, Nigeria was rank to be...
Read more
Online Business

How to make money online in Nigeria Legitimately

How to join FES One International and Earn every day

How to become Golden Penny Distributor in Nigeria

How to Become Noodles Distributor in Nigeria

Bitter leaf is a vegetable that is well loved by Africans, its botanical name is Vernonia amygdalina. there are many reasons to consider bitter...
Read more

Mushroom farming is one very lucrative farming business that has really never been utilized to its maximum capacity in Nigeria. It is very prominent in Kenya, Ghana and many part of the world. Mushrooms could easily be cultivated, whether in a mushroom garden (for private consumption) or in a big farm (for commercial use). These plants are the fleshy, spore-bearing fruit body of a particular fungus, typically produced above ground, on soil, or on its food source (tree trunks and woods). It is not a green plant that has chlorophyll for synthesizing its own food through photosynthesis. Rather, they are mainly saprophytes depending on decaying organic matter to produce their own food.  It is important to note that they are wild (poisonous mushrooms) and also edible mushrooms, so when making a choice of mushroom seedlings you have to be careful to pick the right choice of mushrooms. In this post we will show you how to start mushroom farming. But in a subsequent post we will outline the different methods of planting mushroom in Nigeria. There are different kinds of mushroom such as; Oyster, Lion Maine, Shiitake etc. The most popular mushroom to cultivate in Nigeria is the Oyster and Shitake. Mushroom is a globally recognized food staple and is a significant part of various recipes enjoyed in multiple countries and by diverse cultures. Almost all vegetarians can relate with this because it is one of their major food used to replace meat, egg, fish etc. Since food has to balance mushroom has become the protein many homes need. On a global scale, China is the largest producer of mushrooms, producing over 200,000 metric tons of mushroom annually, which amount to about 48% of the global production. The USA succeed this rate,  producing over 60,000 metric tonnes which amounts to about 11% of the global output. Nigeria produces barely 500 metric tons of mushroom, which is way less than its production capabilities, amids its about 1500 metric tons per annual consumption rate, which leads to high imports due to inadequate production. Hints Mushroom farming is a money-spinner In Nigeria, and it has been enjoyed as a very lucrative business for only the very few farmers who have ventured into it. With the ever-increasing demand for mushrooms in Nigeria, the need for more farmers to venture into mushroom farming is now inevitable. Apart from cultivating for local consumption mushroom exportation should be looked into as another source of foreign exchanged.  There are people who are into this crop farming you can learn from although cultivating mushroom is very easy and you can do it yourself if you follow the process. Steps for mushroom cultivation are; sterilization, inoculation, or spaing, colonialization and fruiting. How Profitable is Mushroom Farming In case you are one of those asking how profitable is mushroom farming? I am here to tell...
Read more

We urgently, need to start farming crops in Nigeria, that will yield within the next 3-9 months because of the shortages of food that...
Read more

Rosemary plant is an essential commodity in Agribusiness. They are used for different purposes such as hair product, preservation of foods, garden plants, flavory...
Read more
- Advertisement -
romanianews